Spring is fickle. Warm, sunny days promise that summer is coming.  Cold, windy mornings like this one let us know that winter does not always leave willingly.  A few days ago it was in the 50s.  The edge of my sunniest garden was released from the snow.  I took pause from the scurrying pace of life, to sit on the brick path and absorb the joy of the sun’s rays, pulling off my socks & shoes and placing the bare bottom of my feet on the cold earth.  The first time my feet had touched bare soil in months.  I pushed my fingers into the dirt, pulling some emerging shoots of grass that were tangled up with the shoots of green chives that were beginning to grow.  I could ignore the thick snow that had yet to melt in the back yard.  It will be gone soon enough.

I’ve been enjoying the flocks of goldfinches that have returned to the feeders and have been noticing the change in the male’s plumage, half browns of winter with bright tufts of yellow of spring..

Yesterday, I stopped at the local nursery that was selling pots of tulips and lilies for Easter.  I passed them by and went straight to the first few flats of early pansies and picked out two to bring home.  I thanked Jim, the owner, letting him know that I had been day dreaming about those pansies for the past couple weeks and was so glad to see them.  I will plant them in a pot on the porch in a few days when the current cold snap passes.

Winter was back this morning; windy and in the 20s.  After breakfast we took the pup out for a run in the town forest taking advantage of the hard crust on the snow that had formed overnight to walk without sinking.  Bits of bare earth were showing here and there and the spring seasonal streams were running with snow melt.  I was delighted to spy a tiny evergreen partridge berry plant still holding a couple of red berries from the fall and some bright green trailing arbutus whose white flowers will soon emerge.  We saw lots of deer and moose tracks and went to check on the beaver dam for signs of activity but all was quiet with no tracks or signs of freshly chewed wood.

Some years, we’d already be raking the lawn by now but nature will do as she may. 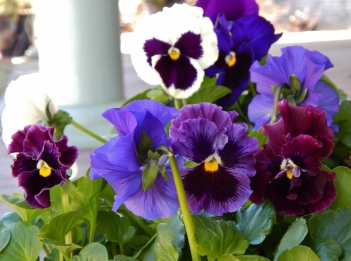 3 thoughts on “Signs of spring”