They came to watch over her in the form of a pair of loons that popped up in front of her kayak as she was paddling against the wind. They dove and resurfaced unusually close and stayed near for the next several minutes until we drew near a diving rock where several people were perched.

As we paddled past the rock a fierce gust of wind kicked up blowing directly in our face intent on pushing us all backwards. It seemed to have a malevolent bent as it blew the cap off of her bald head dropping it in the water directly in front of the young people gathered on the swimming rock. As she scooped it from the water and put the saturated cap back on her head the capricious wind pushed her boat twenty-feet back out into the lake.

The wind settled a bit and we re-traced our path paddling back to the edge. As we neared the swimming rock a second time the unfriendly force again blew fiercely. This time she pushed through digging in with her inner strength and just as she got past the rock, the loons appeared once again in front of her boat and escorted her up the shore line to the point just before the boat landing.

Who, I thought to myself, has come from the other side to check on you and let you know that you are not alone in your journey? Is this guardian spirit in one or both of these loons? This question formed in my mind but I did not speak it aloud to my friend who we had taken out on the lake to enjoy what proved to be her last paddle before crossing over. Did she also recognize the unusual visit, how close the loons stayed and how they seemed to protect and watch over her and guide her forward as she used the last of the energy she had gathered over the past two days for this foray onto the lake?

Our dear friend Lynda passed 6 weeks after this trip.   She was strong, fiercely independent and she lived life in the fashion that the old Frank Sinatra song croons, “I did it my way.”  An avid hiker, backpacker, world traveler, and story teller,  this is her most ambitious journey yet; this one without a map, compass or travel guide. 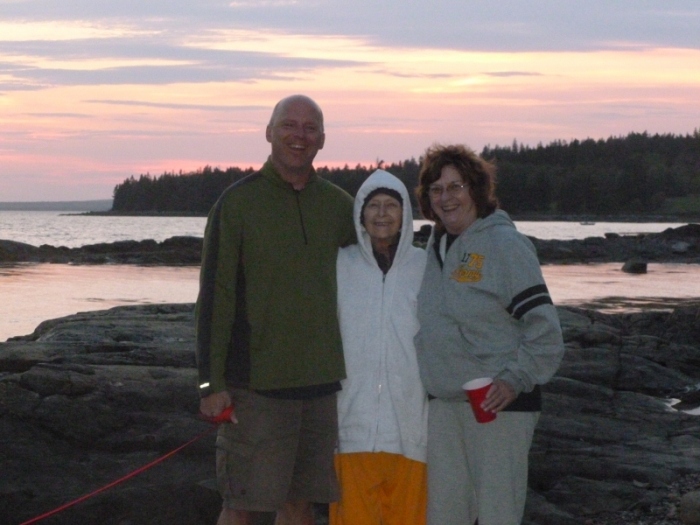 Hamming it up – Chemo Sabe

Healthier days at our son’s graduation

7 thoughts on “The Guardian Loons: a tribute to Lynda”