One day, completely unnoticed by the family, a small little seed sprouted on the edge of the compost pile. Time passed. The seed grew a woody stem and leaves. “Look! A little tree!,” the lady exclaimed. “It looks like a baby apple tree or maybe a pear tree.”

For several years the baby tree grew and when it leaved in the spring the family would wonder, is it an apple tree or is it a pear tree? Eventually the boards holding the compost pile rotted and the family moved the compost pile to the back of the house. Of course the tree could not be moved. It stayed there and grew.

As the year’s passed, the man or the lady would say, “maybe we should prune the tree. It’s pretty lanky.” But they never did. The tree kept on growing anyway. One exciting spring, the tree bloomed, just a couple of buds or so. One of the buds began to form a small fruit and soon the family knew. “It looks like we have an apple tree,” the man said.

By now, the tree was pretty tall. And it was crooked with branches on just one side that reached for the sun. The back side was too shady due to the maple trees that grew just a bit too close. One year it grew just enough smallish apples to make the family pay attention. The man tried one. “These are delicious!” The lady tried one too and agreed. 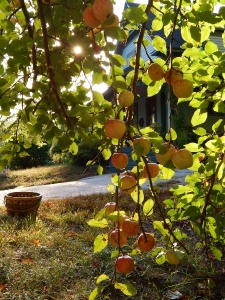 This year the tree was more crooked than ever with a small scrape in the bark thanks to the town plow truck pushing snow up onto the family’s lawn. But like all of the apple trees in the region the tree put forth a great burst of blossoms in the spring followed by an abundance of apples. The dog that now lived with the family liked to pick up the dropsies and toss them into the air and play with them like miniature balls. As the apples filled out, the crooked little tree looked even more lop-sided with apples pulling its sunny side branches toward the ground.

As the apple’s turned red, the man, the woman and the dog began to eat them. The woman was so impressed by the sweet flavor of the white, crisp flesh that she made some apple sauce and apple crisp. The daughter who helped to make the apple sauce was so skeptical of the imperfect wild apples she did not take even one bite as she cut them. Later she said the sauce was delicious and was shocked to hear there was no sugar in it, just the natural sweetness of the apples. The lady was so grateful for the gift of the freely given, tasty apples from the wild, crooked little tree that she decided to write a story about it. And so she did. 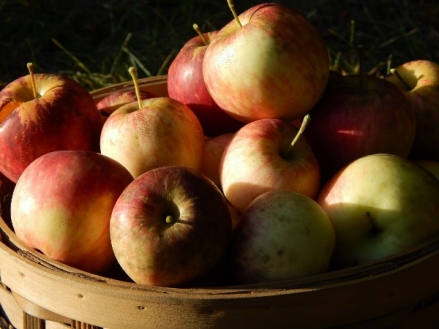 2 thoughts on “The crooked apple tree”