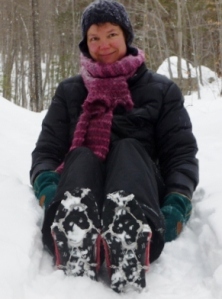 M purchased these cool new Microspikes for our winter hikes after observing how much easier it was for other hikers to walk along on the icy spots than it was for us and we wanted to try them out. The weather forecast was for increasing wind speeds as the day went by so we headed out right after breakfast. It was snowing moderately with a steady light wind as we started out walking on the packed snowmobile trail at the bottom of the mountain.

The woods were quiet and lovely with fresh, powdery snow clinging to branches, bark and rocks.

As we headed further up the mountain the trail split off from the snowmachine trail into a footpath already tracked down by some snowshoers. As we warmed up from the exertion of climbing up I unzipped my down jacket and took off my outer mittens to let out some of the extra heat. Higher up the trail which had melted and refroze where it is exposed to the sun we found the microspikes came in handy gripping easily on the slippery spots hiding under the fresh snow on the trail.

As we neared the top the wind was getting stronger and blowing snow into our eyes. We zipped our jackets up tightly and pulled out the snow goggles and scarfs before heading out over the open top.

prepared for the blowing snow and strong winds at the top

At the peak the wind was blowing fiercely. We had to lean into the wind to go up the the last section to the summit and ducked into the stone, roofless wind hut at the top where we found a Dad and a young boy about 8 or 9 years old who had snow-shoed up a different trail. It was too cold and windy for a snack so after catching our breath we forged back out into the wind before we got too chilled from sitting still. The Dad and boy decided to walk down with us ’til getting back below tree-line since the trails had largely disappeared under the drifting snow due to the blowing wind. Exiting the hut I had to crouch low and lean into the wind in order to walk forward. I’m guessing the wind was gusting up to 70 miles per hour. M, the Dad, boy and I picked our way across the summit. There were spots where the wind blew the new snow off and we could easily see the packed trail underneath and others where the trail completed disappeared under blowing, knee deep snow. Between three sets of adult eyes we managed to find our way back to the tree-line but even then the wind continued to blow hard and we had to keep a close eye out for trail blazes. Finally about 1/3 of the way down we were able to take our goggles off and the trail became easy to follow again.  I was glad I wasn’t hiking solo today during this harsh, unforgiving conditions.  You can read about my solo hike from earlier in the winter here.

Our final verdict from our first test run of the Microspikes is that we liked them very much. There wasn’t a lot of ice on the trail but they did make walking easier and definitely helped out on the packed, slippery spots. We look forward to testing them out under various walking conditions.

For more on wind speed and how fast the wind needs to blow before it sweeps you off your feet, check out this blog post from the Mt. Washington Observatory where today’s peak wind gust was 96 miles an hour and the current wind chill is -55F.  The top of Mt. Washington is known as the “home of the word’s worst weather” where a record wind gust of 231 miles per hour was recorded in 1934 and its windiest summer day was in 1996 when the wind blew between 100-153 miles per hour for the entire day!

FYI – we have no relationship what-so-ever with Microspikes but provided a link in case you want to check them out too.